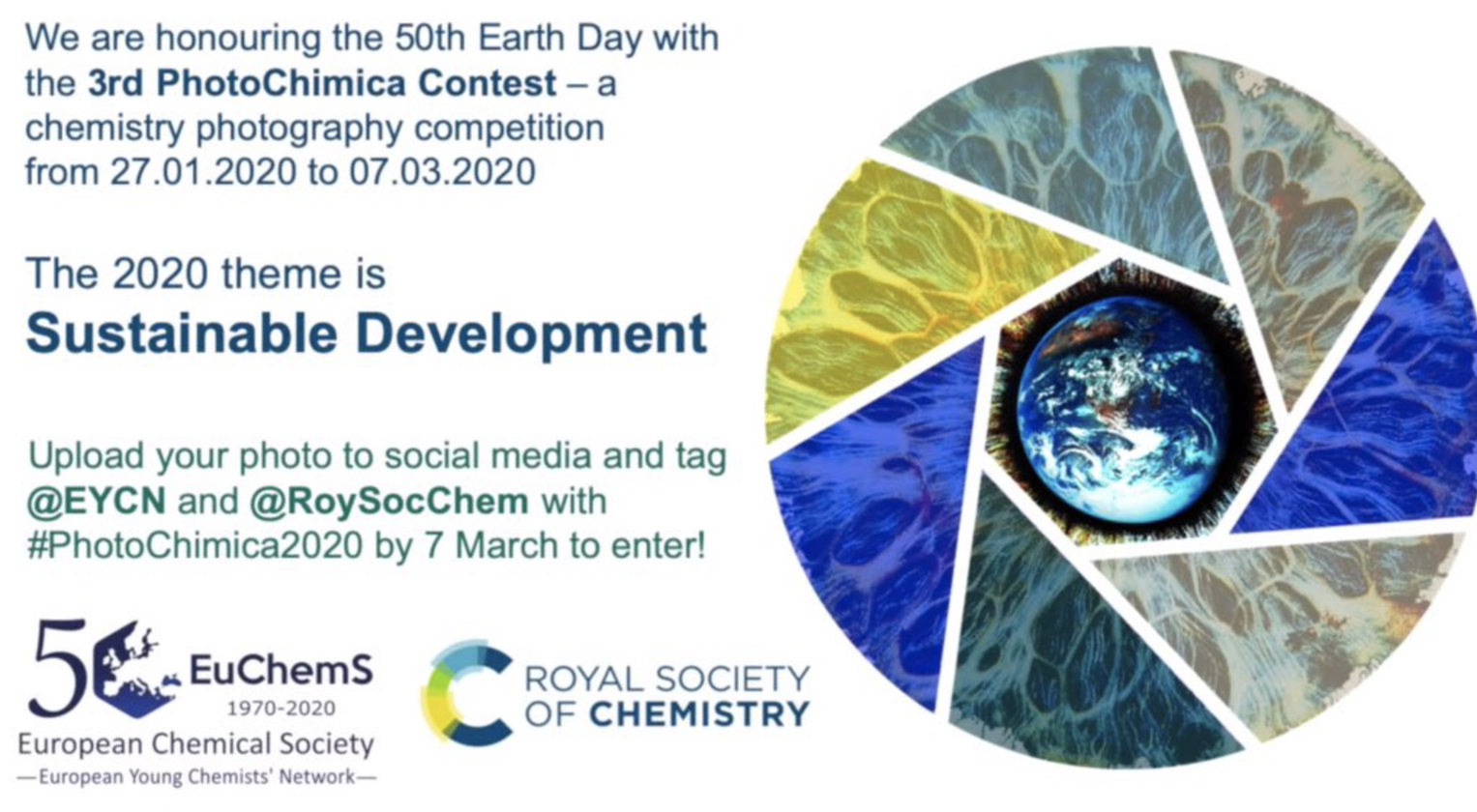 The aim of the European Young Chemist Award (EYCA) is to showcase and recognize the excellent research being carried out by young scientists working in the chemical sciences. In particular the award is intended to honor and encourage younger chemists whose current research displays a high level of excellence and distinction. It seeks to recognize and reward younger chemists of exceptional ability who show promise for substantial future achievements in chemistry-related research fields.

Currently, calls are open! You can apply directly here.

This year marks the 150th anniversary of Dimitri Mendeleev’s development of the Periodic Table of Chemical Elements. That is why, the United Nations has proclaimed 2019 as the International Year of the Periodic Table of Chemical Elements (IYPT 2019). Being the best “friend” of a scientist for predicting the appearance and properties of the matter, the Periodic Table of the Elements represents one of the most significant achievements in science.
To join in this special celebration, EYCN organized the second edition of its video competition Chemistry Rediscovered in honour of the IYPT. We are proud to present you the winners below! 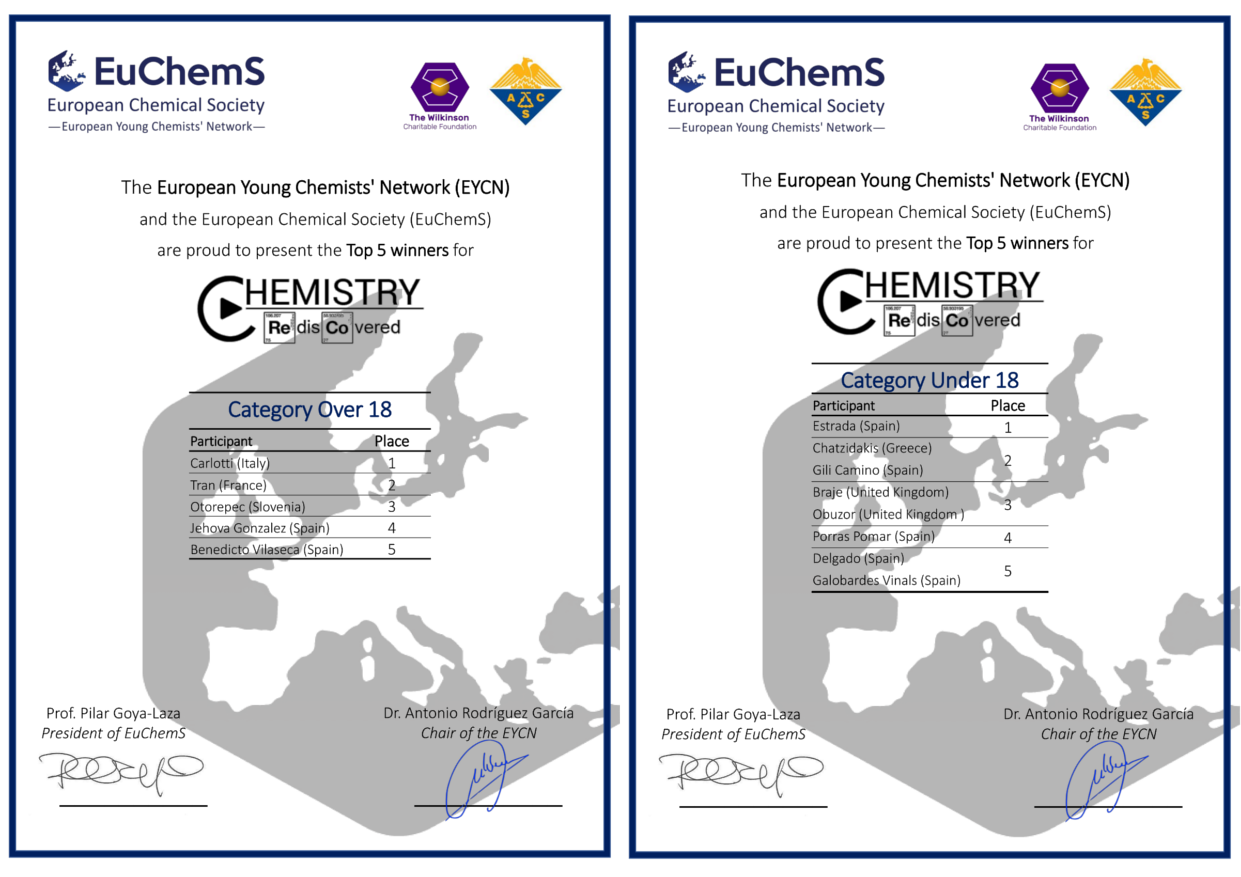 Chemistry is all around us. At any moment, wherever we are, whatever we are doing, we are always surrounded by atoms from all over the periodic table combined in countless ways to make the molecules.

On our daily basis, we are more likely to interact with molecules rather than single elements: this is because our needs – from smartphones, to food, to the very processes that happen in our cells – require a level complexity that elements alone cannot provide.

Their rarity is the reason why everyone always feels a spark of curiosity when interacting with a pure element. It is true that nowadays, thanks to chemical technologies, we have an easy access to many pure elements – like the aluminum foil in your kitchen or copper in electric wires –, yet one cannot but feel amazement when seeing a new pure element for the first time.

Maybe for this reason, finding pure elements in nature can be extremely fascinating. Unfortunately, only a handful of them can exist in such ‘native’ state, and the chances of finding one decrease as we move away, in terms of periodic table, from the noble metals like gold, platinum, and silver. But there are exceptions!

In this video I traveled to a geothermal spot among the hills of central Italy, to show how and where you can find your own elemental Sulfur, one of the few non-metals that can be found pure and not bound to any other element. But beware – as often in chemistry – it won’t smell nice!

This video aims at familiarizing the general public to the lesser known, still very useful element that is gallium. In fact, gallium was found in many electronic devices we use every day as a semiconductor dopant or as a semiconductor itself when it is bound to nitrogen to form gallium nitride. The latter is likely to replace silicon-based semiconductors in the near future due to its exceptional properties. This video also emphasizes on the impact of Mendeleev’s theory of the periodic table in the sense that most of the gallium’s properties, such as its low melting point, and even its existence (eka-aluminium) had been predicted by Mendeleev himself thanks to the periodic table. Gallium was discovered in 1875, a few years after Mendeleev’s predictions, by French chemist Paul-Emile Lecoq de Boisbaudran. As mentioned before, it has a remarkably low melting point of 29.7 °C. This enables one to mold metallic objects without being burnt. In the video, a variant of the famous mercury beating heart using the non-toxic gallium is shown. Gallium also has a few academic applications such as in Focused Ion Beam or to synthesize oxide thin films on the surface of gallium droplets.

The purpose of the submitted video is to broaden horizons about the importance of chemical element carbon and to present its impacts on mankind.

Carbon is the fourth most abundant element in the universe by mass after hydrogen, helium and oxygen. It is a structural important element of essential molecules of life as it is presented in proteins, carbohydrates, lipids as also in nucleic acids, e.g. DNA.

Carbon in various forms caused an enormous impact on human life in history, e.g. black gunpowder was partly composed of it, as a principal source of energy it played an important role in industrial revolution, usage for writing with graphite pencils, carbon paper was used for making copies, carbon was also included in wars because of diamond mining, discovery of fullerenes and ground breaking 2D material graphene were awarded with Nobel prizes in 1996 and 2010, discovery of

In the end, a practical use of carbon is demonstrated through the experiment where with dehydration of sugar (sucrose), H2SO4 and followed activation with CaCl2 activated carbon was prepared. The latter was then used as a filtration agent as it was added to a stirring yellow coloured solution KI/I2 that was afterwards filtered. Due to adsorption of iodine on activated carbon, the filtered solution resulted as purified water.

The main purpose of this video was to show you how to tackle with Chemistry in a different way instead of using the traditional approach. We tried to find a didactic and creative way to convey a visual and entertaining idea in order to get closer to the viewer.

Have you ever wondered about what would the elements of the periodic table be like if they were human?

We have moved thus into our High School scenario experimenting with the periodic table trying to explore how it could be like if the elements behaved like real teenagers. We have represented the most known elements and we have personified them by assigning each one a personality, taking into account their intrinsic chemical characteristics. Then, we have created a storyline for them to live together, as they do in nature, but adapted to their school background. All this was done in order to show people unconventional ways of how the elements work, because new methods to transmit the passion for chemistry can be found while innovating and using one’s imagination.

The video "In your element: iodine" features physical, chemical and biological properties of the iodine element. In the first part, we demonstrate the transitions between solid and gaseous states of iodine. The purple iodine fumes as well as the shiny iodine crystals formed make this demonstration experiment really impressive.

Next, we perform a variant of "the iodine clock" reaction(s). It is a classical chemistry experiment in which the abrupt color changes make it suitable both for teaching reaction kinetics and chemistry demonstrations. We timed the color development with pouring making it more spectacular and then we decolorized the solution just to bring the color back after a few seconds!

Digging in biochemistry, we show under the microscope the characteristic coloration, shape and patterns of potato starch granules as stained with iodine/iodide solution (Lugol). Then we highlight the importance of iodine as a micronutrient in human diet and we show a small part of a titration method for determining supplemented potassium iodide in table salt.

Music is excerpts from “1812 Overture” by P. I. Tchaikovsky. It was chosen because of its vibrance and rhythm and some notable parallelisms with our video: "1812 overture" was synthesized in commemoration of important Napoleonic war battles. At the same time, in 1811, iodine was serendipitously discovered during saltpeter preparation which was in need during Napoleonic wars! Moreover, NI3 was first synthesized in 1812!

Life is quite complex and a living organism is composed of many different cells, which work together through a perfect regulation of multiple molecular pathawys. This video shows us which chemical elements are most important for the composition of our bodies and explains their main purpose and abundance.