EuChemS special prize for best chemistry contribution at the European Union Contest for Young Scientist (EUCYS), is attributed every year at EUCYS to a young scientist for hers/his research work in the field of chemistry. EUCYS, an initiative of the European Commission that was set up in 1989 with the goal of promoting cooperation and interchange between young scientists and guiding them towards a future career in science and technology. 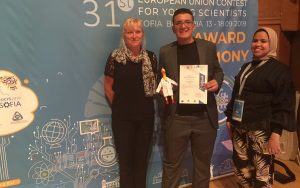 Zeyad Bady, from Egypt, has been awarded the special EuChemS prize for his project on ”High particulate matter filtration efficiency Nano-fibrous membrane” which was selected as best Chemistry project at the 2019 edition of the EU Contest for Young Scientists (EUCYS).

Zeyad’s project looks at how particulate pollution has led to catastrophic health and environmental consequences. As a result, new approaches have been done to increase the efficiency of the air filtration equipment. Here a novel nanofibrous air filter made via electrospinning process is demonstrated, which has attractive attributes of high filtering efficiency and low resistance to air flow. The filter could be manufactured with a transparency of 90 % and an efficiency of > 85% under intense smoke exposure. Consequently, the filter could be applied as a muzzle, an alternative for catalytic converters of car exhausts or fabric filters used in the treatment of factories emissions. Additionally, the filter is made from hydrophilic polyacrylonitrile which makes it recyclable and efficient in humid circumstances. 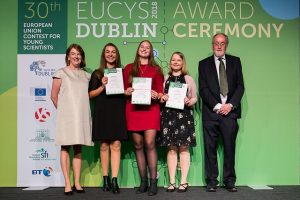 Leandra Zinke, Katarina Juhart and Sofia Quitter are the winners of the 2018 EUCYS EuChemS Award for their project entitled “Anti-Bacterial Silvernanoparticle Coating”.

Leandra Zinke, Katarina Juhart and Sofia Quitter looked at the possible uses of silvernanoparticles, especially in terms of their antibacterial properties. The idea was that antibacterial coating could be produced and applied on everyday objects such as door handles in order to improve hygiene. Using chemical synthesis to create the silvernanoparticles, these were then coated on different substrates to test their functionality. After bacteria had been placed on the coating, swabs were taken, revealing that there was little to no bacterial growth. 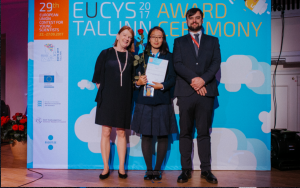 Karen Slavin, Songrui Zhao, and Attila Borics (President of the Jury), in Tallinn

Songrui Zhao is the winner of the 2017 EUCYS EuChemS Award with her project entitled “A Research on Synthesis, Characterization and CO2 Absorptive Character of Pyridinium-based Ionic Liquids.”

Songrui Zhao  synthesized  three kinds of pyridium-based ionic liquids as new solvents for CO2 capture. Their physical properties and CO2 absorbing abilities were measured, calculated and analyzed. The cycling abilities and absorbing principle of these liquids were also discussed. The results show that the three kinds of ionic liquids can absorb CO2 efficiently and can be recycled completely. The new liquids can be widely used in industrial CO2 capture process. 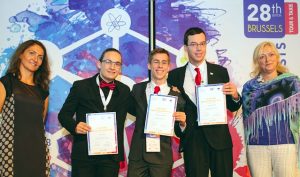 Mining gemstones damages the environment and often occurs under dehumanising conditions. Christian Schärf, Paul Rathke and Friedrich Wanierke hypothesised that, because rubies and sapphires are a mixture of aluminium oxide and certain metals, it might be possible to produce the gemstones themselves. The trio experimented with various melting and crystallisation processes, and thoroughly analysed the synthesis progression and the powder particles and crystals that formed. The young researchers came to the conclusion that nature is a highly skilled chemist. They succeeded in creating tiny ruby monocrystals but the path to creating a large gemstone in the lab proved more difficult than anticipated. 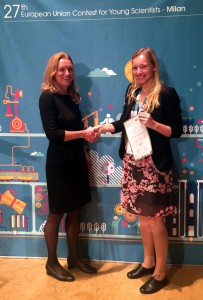 Michaela Kajšová, from the Czech Republic, is the winner of the 2015 EUCYS EuChEMS Special Prize with her project entitled “The Effect of Cholesterol on Biological Membranes”. EuChemS interviewed Michaela shortly after she received this prize. This interview, where Michaela´s enthusiasm for research is evident, can be found here.

Mammalian cell membranes, thin borders on the surface of cells in the bodies, are responsible for molecular transport. The purpose of this project was to clarify the influence of cholesterol on different types of lipid membranes in atomistic details. M. Kajsova prepared bilayers composed of various types of lipids, differing in the percentage of present cholesterol. She monitored the system behavior for 200 ns using molecular dynamics simulations and then performed several analyses. All the membranes were more organised and less fluid after addition of cholesterol. The properties of the membrane differ depending on the lipid bilayer type. However, cholesterol reduces the differences and makes all the membranes almost similar, when the amount of cholesterol increases far above normal values. 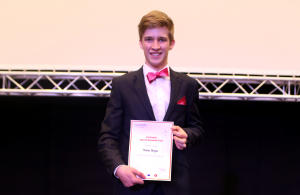 Congratulations to Thomas Andrew Morgan who won the EuChemS special prize for best chemistry contribution at the European Union Contest for Young Scientists 2014 in Warsaw for his work on the effect of UV light on vitamin D2 concentration in oyster mushrooms.

Thomas A. Morgan investigation that shows oyster mushrooms have the potential to be enriched with vitamin D and could help address vitamin D deficiency which is linked to osteoporosis. Thomas investigated whether the concentration of ergocalciferol or vitamin D in oyster mushrooms changed when the mushroom were exposed to ultra violet light over different periods of time. Thomas grew oyster mushrooms for a long period and then exposed them to UV light. He also made an extensive search of literature, finding a spectrophotometer technique that he adapted and extended using a laboratory titration technique. His results showed a strong correlation between the length of time the mushrooms were exposed to UV light and their concentration of vitamin D.