News from the division

January – DNRC is now on Facebook and LinkedIn
We have launched a Facebook page and group and a LinkedIn group (check out the links!). We will use these to promote our Division on social media. Please join the groups, gives likes (or dislikes..), and help us add content. If you are arranging a workshop, seminar or conference related to DNRC we would greatly appreciate if it can be announced on our pages. Likewise with positions and scholarships, summer/winter schools, etc. 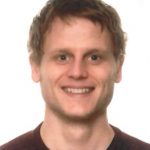 The Belgian chemical society (KVCV) nominated Prof Thomas Cardinaels of SCK•CEN ǀ Belgian Nuclear Research Centre, and the University of Leuven (KU Leuven), as a new DNRC member. Since 2015, Prof. Cardinaels has been a Guest Professor at KU Leuven in the Department of Chemistry, where he is in charge of the courses Nuclear and Radiochemistry. In the same year, he became head of the Radiochemistry group at SCK•CEN, which activities cover a broad discipline of radiochemical analyses, partitioning and conversion of minor actinides, and the synthesis of nuclear fuels. Recently, the research of the group is more and more focussing on the production of medical radioisotopes, and the development and synthesis of therapeutic radiopharmaceuticals. For more details, see his C.V. Welcome on board, Thomas! 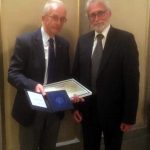 The first of its kind DNRC Honorary Membership award together with the Pro Meritis medal were awarded to Dr Tony Ware during the 13th International Symposium on Nuclear and Environmental Radiochemical Analysis that took place on 17-20th September 2018, Jesus College, Cambridge UK. This particular award was in recognition of the supreme efforts Dr Ware provided in order to set up the Division of Nuclear and Radiochemistry of EuChemS. This came from the vision and drive he has always had to get all the radiochemists in Europe together under one banner, which has led to more and better cooperation across national boundaries. The award and the medal were presented by Prof Jan John, the Secretary of the DNRC.
The role Dr Tony Ware played in the establishment of DNRC is described in detail in the “History of the Division of Nuclear and Radiochemistry section of EuChemS”. More details on the award are available in the Honours section, the diploma can be viewed here. Full ERA13 symposium report is available here.

“DNRC Honorary Membership” award established
By the update of its Procedures and Practices the Annual Meeting of the DNRC established this new award. “DNRC Honorary Membership” is designed to honour a person of outstanding merits and long-lasting valuable services for DNRC. More details are available in the Honours section, full conditions in the DNRC Procedures and Practices.

New chairman elected
On August 29, 2016, Prof. Jon Petter Omtvedt was elected as a new chairman at the DNRC meeting that took place during the NRC9 conference in Helsinki.

Nuclear and Radiochemistry in Europe Newsletter – 2016

Nuclear and Radiochemistry in Europe Newsletter – 2015