is designed to honour a person of outstanding merits and long-lasting valuable services for DNRC. Current DNRC Delegates, Observers and Guests are not eligible. Any Delegate can submit in writing a detailed proposal outlining the case for an award. The proposal will be decided at the next Annual Meeting. The DNRC Honorary Membership consists of a document which states the acknowledged merits and a right to attend the DNRC Annual Meetings in advisory role.

The DNRC Honorary Membership document may be accompanied by a “Pro Meritis” DNRC medal. The medal was designed by M.A. Peter Vogel, graphic works were accomplished by M.A. Jitka Ticháčková, engraving by Zbyněk Nečas, cold enamel by Petr Kazda, silvering by Galvanotechna Jablonec nad Nisou, and the presentation box was produced by Studio Činčera (all Czech Republic). The name of the awardee is engraved on the reverse of the medal. 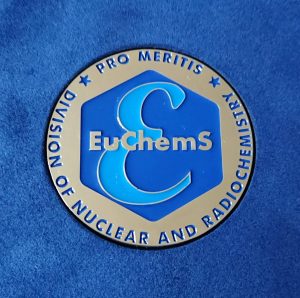