Professor Ioannis Katsoyiannis was elected new Chair of the EuChemS Division of Chemistry and the Environment.

Ioannis Katsoyiannis received his PhD from the Aristotle University of Thessaloniki in 2003, after having spent short research periods in Germany as a DAAD research fellow. He conducted post-doctoral research first at the Technical University of Berlin as an Alexander von Humboldt Foundation research fellow and later at the Swiss Federal Institute of Aquatic Science and Technology (Eawag) 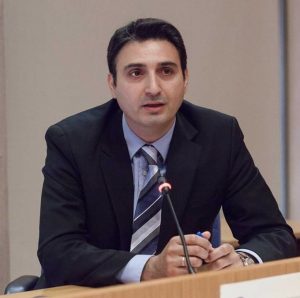 as a recipient of a Marie Curie Individual Fellowship.

He later worked for four years as environmental chemical engineer in the industrial sector of power plant chemistry, first for Alstom Power and later for Hitachi Power Europe. In 2014 he was appointed lecturer at the Laboratory of Chemical and Environmental Technology of the department of Chemistry of the Aristotle University of Thessaloniki. Since 2016 he is assistant Professor at the same department. In 2015, he was a recipient of the prestigious fellowship from the Swiss National Science Foundation and spent three months visiting the group of Professor Urs von Gunten at EPFL.

Ioannis has published over 50 papers in peer reviewed journals, with over 3000 citations and a current h-index of 22. He will be Chair of the EuChemS Division of Chemistry and the Environment until 2020.