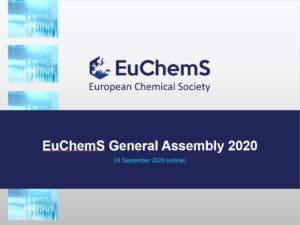 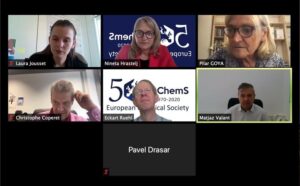 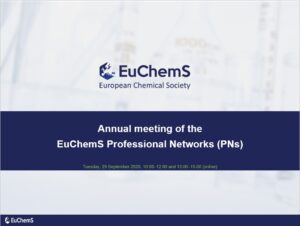 This was the first-ever EuChemS General Assembly meeting which was held online, including the voting. The meeting was chaired by Pilar Goya, EuChemS President, who presented the highlights of the European Chemical Society in the last twelve months. Her presentation included amongst other updates on what is new at EuChemS, EuChemS’ 50th anniversary initiatives, policy work, projects, communications… Her presentation was followed by updates on the financial matters given by Eckart Rühl, EuChemS Treasurer. Presentations are available for download below. Another peak of the General Assembly meeting were elections for three elected members of the EuChemS Executive Board. Congratulations for being elected go to Renáta Oriňaková (her first term as an elected member) and to Christophe Copéret and Artur Silva who were both re-elected for a second term. Their mandate starts on 1 January 2021.

Pilar Goya, who chaired her last General Assembly in her capacity of the President of EuChemS, was warmly thanked by Floris Rutjes, EuChemS Vice-President, and Nineta Hrastelj, EuChemS Secretary General, for her work during her mandate (2018 – 2020).

EuChemS warmly thanks every attendee who participated in the 2020 General Assembly. The EuChemS Secretariat has carefully prepared the first ever online EuChemS General Assembly meeting and is happy that it was made a success, thanks to the active participation and collaboration of all the participants from EuChemS Member Societies and Supporting Members during the meeting.

This was the first time ever that the annual PNs meeting was organised online and therefore was able to accommodate more representatives of each PN than a physical meeting: Chairs, Vice-Chairs, Secretaries, Treasurers and Website Editors of all 19 EuChemS PNs were invited, and by doing so it was ensured that each PN had at least one Board member present the meeting. This meeting received very encouraging positive feedback since it offered a direct channel of live communication among all EuChemS PNs.

The meeting was chaired by Pilar Goya, EuChemS President, who presented the highlights of the European Chemical Society in the last twelve months, including various EuChemS updates, 50th anniversary initiatives, policy work, ongoing and finished projects, communication plan etc. Updates on financial matters were given by Eckart Rühl, EuChemS Treasurer, and other internal issues were discussed by Nineta Hrastelj, EuChemS Secretary General.

Term of office for current representatives of the PNs in the Executive Board (Marco Arlorio and Anna Trzeciak) comes to an end on 31 December 2020. These two positions will be taken by Slavica Ražić (Chair of the Division of Analytical Chemistry – DAC) and Péter Szalay (Chair of the Division of Computational and Theoretical Chemistry – DCTC), both elected for their first term. Their mandate will start on 1 January 2021 (the term as Appointed Member is linked to the term of office as the Chair of a Division).

This was the last PNs meeting was chaired by Pilar Goya in the capacity of the EuChemS President, and Floris Rutjes (currently Vice-President) will take over as President as of 2021.

EuChemS warmly thanks every attendee who participated in the 2020 annual PNS meeting, carefully prepared by the EuChemS Secretariat, and greatly appreciates active participation and collaboration of all PNs during the meeting and throughout the year!