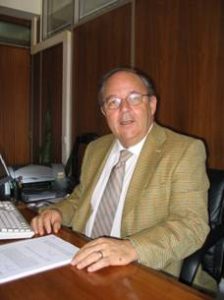 It is with great sadness that we have learnt of the death this past September of our colleague, Prof. Dr José Abecassis Empis.
For many years José Empis contributed to the Working Party on Food Chemistry (later Food Chemistry Division). He actively helped create a European community in Food Chemistry, which led to an increased collaboration between scientists in different countries. In addition, he worked to create a more visible platform for food chemistry by creating journals and organizing conferences that brought together groups from different universities, faculties, and countries. He was also active on the Editorial Board of “European Food Research and Technology” and the “Czech Journal of Food Science”. His scientific contributions to food chemistry covered a wide range of fields – from preservation technology and minimal processing to the study of natural pigments.
From 2002 to 2006 José served as a delegate to the 6th and 7th Framework Program and was a member of the Board of FCES during its transition to the EUCheMS with new objectives and responsibilities. During the transitional period between 2006-2010, he was the first treasurer of the EUCheMS and successfully took on the difficult task of reorganizing and establishing the body as the legal entity AISBL = Association International Sans But Lucratif. A close friend suggested changing the name to the AILSB (Ass. Intl. Lucratif Sans But). José’s engagement was anything but “lucrative”. He invested countless hours and days in this endeavour – attending meetings in Brussels with other board members and our secretary Evelyn McEwan, as well as with functionaries from the bank. José navigated this demanding challenge with elegance, humour, and optimism.
In 2011 in appreciation for his hard work and dedication to the field, he was awarded the “Honorary Medal for Outstanding Services to the Federation and for Furthering International Cooperation in the Field of Chemistry”.
We will remember him as a cheerful colleague during evenings at the Heurigen; as a vital part of the Food Chemistry’s Division meetings in Vienna; and as generous host to committees and commissions in Portugal, where he introduced us to Fado, Portuguese wine and Grilled Sardines à la Portugaise – unforgettably and uniquely “José”!

Professor Baltes, together with Professors Czedik-Eysenberg and Werner Pfannhauser were the motivating force that brought food chemists from across Europe together in 1977 as the Working Party on Food Chemistry of the Federation of European Chemical Societies.
Many of our more experienced members remember the early days when the Working Party was establishing itself through the organisation of scientific conferences, most notably the biennial Eurofoodchem conferences. Professor Baltes was at the centre of these, planning the topics and structure, developing a planning schedule and establishing the conference programme. The paper, scissors and sell tape with which these activities were speedily and effectively conducted during annual meetings in Vienna are now legendary.
At a time when the internet allows international communication to be conducted in real time, it is quite amazing what the team, led by Professor Baltes, achieved at a time of Europe being divided into East and West, slow postal communication, infrequent face-to face meetings and the problems of publicising and promoting conferences. There were, of course, many competing opinions and perspectives about the nature, topic, venue and programme of the conference to be organised but Professors Baltes and Czedik Eysenberg achieved a supportive consensus at all stages, a very considerable achievement. It is no overstatement to say that many European food chemists gained knowledge of conference organisation through the example set by Professor Baltes. Many more were encouraged to follow a career in food chemistry, as a central element of food science and technology, through Professor Baltes’ seminal book, “Lebensmittelchemie” (Food Chemistry), originally published in German but subsequently translated into many languages. During his academic career, which culminated in Professorship at Institute of Food Chemistry of the Technical University of Berlin, he was active in food analysis and in studying the many changes that occur in foods during processing and cooking, and which contribute to the flavour, colour, acceptability and nutritional quality of the consumed product. As a consequence, Professor Baltes was internationally recognised for his research and leadership, and gave many invited and plenary lectures.
He supervised many PhD students and passed on to them his critical thinking and interest in the way that food chemistry complemented many other areas of scientific and technological enquiry. At conferences, Professor Baltes was always approachable, especially to students and researchers at the beginning of their careers; indeed – in many cases – he made the first approach. His questions were precise and encouraged a response, and he was always ready to pass on his extensive knowledge and international contacts.
Although Professor Baltes never held any formal position within the Working Party/ Division, he served as Eurofoodchem Conference President for many years. He was an immensely supportive colleague of all its Chairs, Peter Czedik-Eysenberg, Reto Battaglia, Roger Fenwick, Trygve Eklund, and Livia Simon-Sarkadi and their officers. Away from the lecture theatre, Professor Baltes, had a great interest in music, read extensively and was a formidable raconteur.